“Reach out your hand if your cup be empty If your cup is full, may it be again…”
—Robert Hunter

Andy Logan is a Dead Head who recognizes (along with the rest of us!) that Dead music is our common heritage and a nurturing source of love for us all. Wanting to support that, and having a collection of guitars, he began to lend and sometimes give special instruments to gifted players who didn’t have the means to acquire them on their own. This came to include not only first-quality examples of the types of guitars that Garcia and Weir had played, but then instruments built for them, as well as instruments Jerry owned, most famously “Alligator,” his axe from the era of Europe ’72 and the Martin acoustic he used to record American Beauty. 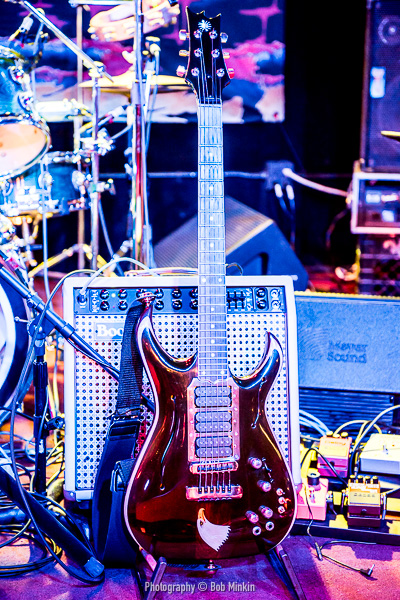 It is time to formalize this practice, and so today, June 8, 2021, we are announcing the official founding of the Grateful Guitars Foundation. Our mission statement: “Grateful Guitars is a 501-c3 nonprofit that obtains world-class musical instruments for talented players who seek to carry on the tradition of jam band music into the 21st century and beyond. We identify musicians who thrive in live settings and we secure the gear they need to reach their fullest musical potential. Through the powerful connection between the skilled player and the highest quality instrument, our aim is to ensure that jam band music thrives for generations of live music fans.”

Logan added, “There’s just no doubt in my mind that the more really good instruments are out there, the more the jam band scene thrives, the more that Grateful Dead music continues to grow and touches more people, even if the band is no longer playing. And it’s fun to help feed that growth by gifting guitars to musicians, kind of helping them and helping the scene that I love.”

After a basic East Coast Dead Head youth (first show Hartford 4/3/88), Andy followed his wife-to-be to the Bay Area (bonus: more shows!), and after a career in high-tech marketing, earned his credentials as a psychotherapist. In 2008 he began to learn guitar, and naturally bought the guitar Garcia played on Live Dead, a Gibson SG. Not too long later, he stepped up and purchased the Steven Cripe guitar “Tribute,” also known as “Saturn” for the rings inlaid on the neck, which had been built for Jerry but was not yet complete on August 9, 1995. Before Andy even took possession, he realized that it had been made to play live music, and he had to share it with the GD community as the original builder and player had intended.

He naively popped up just before showtime at a Dark Star Orchestra show at the Great American Music Hall in San Francisco—in the future he’d learn it was better to arrive before sound check and give the guitarist time to make friends with the guitar—and Jeff Mattson graciously subbed it into the night’s festivities. It was a revelation to watch him, and later other musicians, be inspired by the equipment and watch that energy flow to the fans. Soon after, when Phil Lesh and Friends began a re-creation of shows (one a year for the 30 years), Andy lent Stu Allen a vintage Guild Starfire for 1965 and then many more Garcia guitars for later years, as well as some Weir-style guitars to Grahame Lesh and Scott Law. Then Stu Allen began a similar re-creation at Ashkenaz, and the GD gear flow continued, including when Andy found a Fender Deluxe like Garcia’s for the 1971 show. The tone moved not only Stu but also a person in the audience who’d been present at the original show at the Berkeley Community Theater some 45 years before.

His efforts have drawn in luthiers like Rich Hoeg, a former Modulus employee who still builds for Weir, Leo Elliott of Scarlet Fire Guitars, and Kevin Burkett of Travis Bean Design, who has made copies of the Travis Bean guitars that were Garcia’s 1975-1977 axes of choice, which Andy gifted to Stu Allen (formerly of Phil & Friends and Melvin Seals & JGB), Mik Bondy of the Garcia Project, Zach Nugent (formerly Melvin Seals & JGB, and now Dead Set), and Garrett Deloian of Jerry’s Middle Finger. The circle grows, and with today’s launch it can grow much larger.

Jerry used to say to his bandmates, “Serve the music.” Andy and the Grateful Guitars Foundation are working to do just that. Dead Heads who want to share in the process should go to www.gratefulguitars.org.